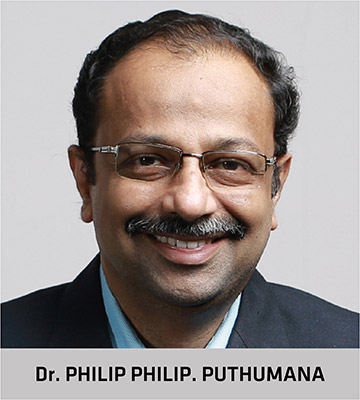 Dr. Philip Philip Puthumana is an eminent Reconstructive Plastic Surgeon of Kerala, practising for the last 20 years as a Plastic surgeon. Plastic Surgery being a broad speciality, Dr. Philip’s core areas of interest are in complex reconstructive Micro vascular plastic surgery and craniofacial corrections for trauma related deformities. Having being worked at many meritorious institutions in Kerala, Dr. Philip is now the HOD & Senior Consultant at Department of Plastic & Micro vascular Surgery, Caritas Hospital.

MCh in Plastic Surgery at Medical College Thiruvananthapuram in 1996

Secured Diplomate of National Board of Examinations, New Delhi, in General Surgery in 1991

He completed his MBBS from Government Medical College Thiruvananthapuram, in 1987

Worked as Senior House Surgeon in orthopaedics in 1988-89

In 1996, he performed the first replantation of a severed Penis in India, for a labourer

Recently he has performed the first of its kind in the world procedure to reconstruct a leg following Osteoradionecrosis of tibia consisting of bypass of the leg artery, transplantation of the bone and skin flap from other parts of the body with microvascular surgery as a three in one procedure with a combined operating time of 26 hours

He was at the forefront of adopting innovative surgical techniques in the fast-changing plastic surgery scenarios. This was further enhanced by his visit to the Chang Gung University Hospital, Taipei, Taiwan in 1999 as an international observer in Craniofacial and microvascular surgery. Chang Gung University Hospital, Taipei, Taiwan, the largest hospital

Dr. Puthumana is a Rotarian since 2000, was the president of IMA chengannur

He is proficient in Malayalam English, and Hindi.